For more than 40 years TEWS Elektronik has been supplying high precision moisture measurement systems to the tobacco industry. The ability to manage moisture in the production process helps to increase control from the incoming bale to the outgoing cigarette and is a considerable contribution to improve “Plant Efficiency”. 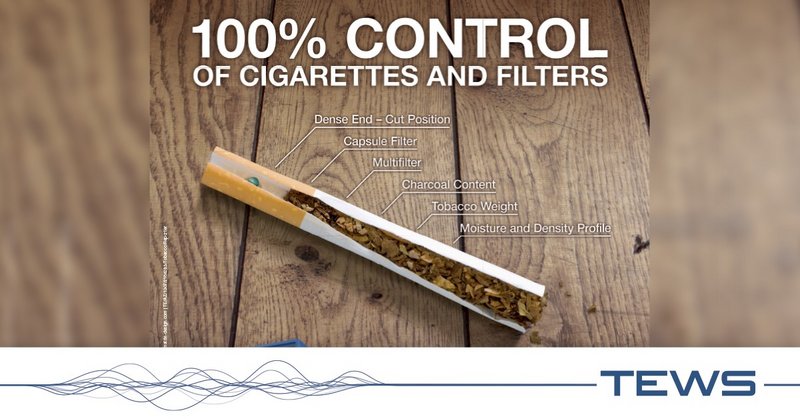 Based on microwave resonance technology, TEWS’ systems measure the moisture and density (Mass / weight) of tobacco and rods in all product stages. What makes the company’s solutions unique is that moisture is able to be measured independently of density, and vice versa.

For this reason, the company’s two parameter microwave resonance technology makes it possible, for example, to detect the moisture, weight and dense-end profile of a cigarette. In addition to this, the system is thus able to measure charcoal content and triacetin in cigarette as well as foreign bodies (NTRM). The technology also makes it possible to precisely detect the position and condition of aromatic capsules in filters.

TEWS has a range of microwave resonance moisture models. As the following most popular and commonly found models illustrate, the company’s solutions are specifically tailored to measurement moisture levels at varying stages of the processing line.

Next in line is the MW 4260, a process instrument for leaf, including cut, reconstituted and finished tobacco. This system offers continuous in-line measurement for processing lines in the primary, capable of up to 3,500 measurements per second. Measurement results are unaffected by variation in the tobacco varieties and its density, and also by surface structure, colour, or incidental sunlight.

The MW 3011 is a high-speed online measurement device which is designed specifically for cigarette makers as a sensor for weight control. 22,000 cigarettes can be measured per minute. Achieving these speeds was one of the biggest technical challenges, the company said. It means that it’s able to deliver real-time results and work as hard, and as fast, as customers’ maker machines.

Still moving down the production line, we come to TEWS’ MW 4420, a multifunctional test station for the final quality inspection of finished cigarettes and filters. The MW 4420 detects moisture, charcoal content and triacetin, weight and density, capsules, foreign bodies and the dense-end control. The device is also able to spot the number, position and condition of capsules within a capsule filter or to determine the different sections of a Multifilter.

TEWS microwave technology is able to measure moisture not only at the surface but also in the core.  Measurements are independent of density, surface structure and varying colour. The measurement is non-radioactive and non-destructive and well suited to improve plant efficiency of GLT, primary and secondary manufacturing departments.

An exhaustive measurement of moisture in the production line provides a greater level of management and control over the entire production process. It also helps to reduce waste and energy needs while assuring higher quality of the finished product. Thus, the TEWS technology makes a significant contribution to improve the "plant efficiency". For these reasons alone, it’s plain to see why these systems from TEWS are popular.

At tewsworks.com we use cookies (e.g. tracking and analytical cookies), which enable us to analyse and measure user data. Further information can be found here:

Please make a selection to proceed.